Will Clarke drops his second EP on Truesoul this year, building on an impressive debut during winter. → 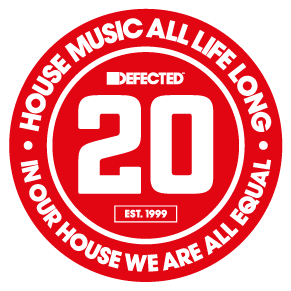 DEFECTED 20
Defected kicked off 2019 with a series of special events and announcements celebrating 20 years of the label and everything there is to love about house music.  On Friday, 4th January 2019, BBC Radio 1 broadcast the year’s first Essential Mix, an extra special ‘Influences Essential Mix’ by Simon Dunmore that provided, in Simon’s own words, “an insight into the music I love and that continues to influence everything we aspire to achieve at Defected Records, as we celebrate 20 years in the house!”

Defected launched a brand new online platform at ‘defected.com‘, providing a one-stop-shop for the entire labels’ catalogues, editorial, tickets, merchandise (including a custom ‘Defected 20’ Alpha Industries jacket collaboration) and more. Defected London FSTVL, a debut one-day 5-stage event, was announced, taking place in September and completing a jam-packed summer diary of two concurrent Ibiza seasons, worldwide tours and the fourth annual Defected Croatia festival. Building on the runaway success of recent sell out shows at Ministry of Sound, Studio 338 and Printworks, some of which dates sold out in less than half an hour, the 10,000+ capacity festival is the natural next step for Defected’s events in London. Meanwhile the quality house releases keep coming from all the labels, with new music scheduled from Todd Edwards, Purple Disco Machine, Honey Dijon, Low Steppa and many more.

About Defected:
Defected Records is an independent British record label specializing in house music recordings, compilation albums, an internationally syndicated radio show, events, publishing, artist booking and management. Established in 1999 by former AM:PM and Cooltempo A&R Simon Dunmore and initially funded by London nightclub and label Ministry of Sound, Defected’s first release was Soulsearcher’s ‘Can’t Get Enough’, which reached No. 5 in the UK singles chart. This early success was followed up with Roger Sanchez’s ‘Another Chance’, which hit No. 1 in the UK singles chart in 2001. As well as a number of sub-labels and sister labels including DFTD, Soulfuric, 4 To The Floor, Glitterbox Recordings and Classic Music Company, Defected also owns and manages over 30 catalogues for heritage house imprints.

Defected run events globally including stages at major music festivals and standalone club nights, as well as residencies in Ibiza since 2003. 2016 saw the inaugural Defected Croatia, a 6-day festival that draws more than 4,000 people from the UK, Australia, North America, South Africa and all corners of Europe, featuring 80+ artists from the Defected roster from across the years.

More than just a label, the recipe for Defected Records’ success has been its ability to evolve and adapt within the industry, while maintaining a robust ethos and core musical identity. One of the longest running independent labels of its kind, Defected has paved the way for house music in the UK and remained a well-respected constant in the music industry for 20 years.